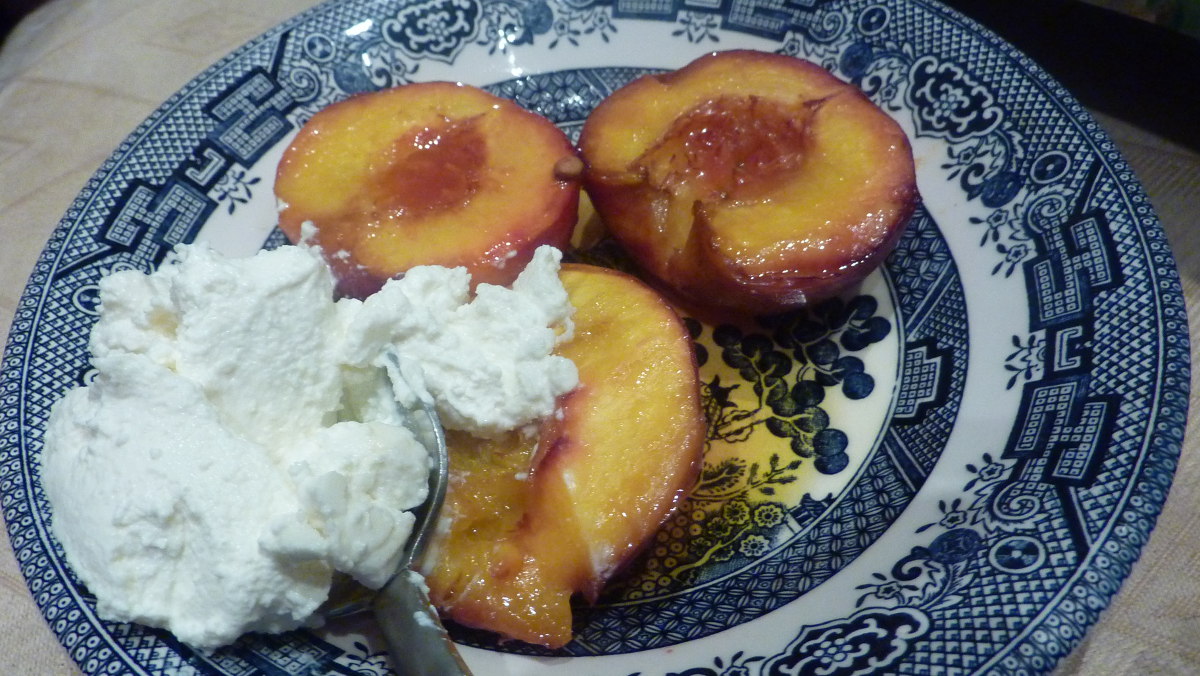 Do you have those moments when you know what you want to eat, but the recipes you find aren’t quite right?  This dish came out of one of those moments.  I thought that baked peaches sounded just right to round off our Italian style anniversary feast, but the recipes I found seemed over complicated, with too many ingredients.

Maybe that’s just me, but I tend to look at recipes and think, ‘I can’t be bothered to buy that! What are you using all those things for?’  And so, I decided that we could use what we had, which was Prosecco.

Prosecco is fast becoming an anniversary tradition, partly because we discovered it when on honeymoon, and partly because it’s delicious!  So I split three peaches in half and took out the stones.  I placed them all in an oven proof dish, skin side down.

My husband then constructed Prosecco butter using margarine, Prosecco and castor sugar.  It tasted delicious!  With a little more sugar it could have been served as an alternative to cream.

This butter was then spread on top of the peaches, which were put in the oven.  The oven was hot from cooking the main course, so I turned it down to 140 °C for roughly 30 minutes, until the peaches were meltingly soft.

Instead of cream, we chose to serve them with a good big squodge of ricotta cheese.  This won’t work for everyone, but for me, it provided the perfect counterbalance to the silky Prosecco-infused peaches.  The only thing I’d do next time- half a peach per person would be plenty.

email
Author: Lizzie
Filed Under: Global Flavours, Italy Greece and the Mediterranean, Sides and Snacks
Tags: Italian desert, Peaches, Prosecco, Recipe, Ricotta
What To Do With A Can of Mackerel 2: Stir Fry
Easy Stir-Fry 2: Garlic, Ginger and Chilli

We use cookies to ensure that we give you the best experience on our website. If you continue to use this site we will assume that you are happy with it.Ok