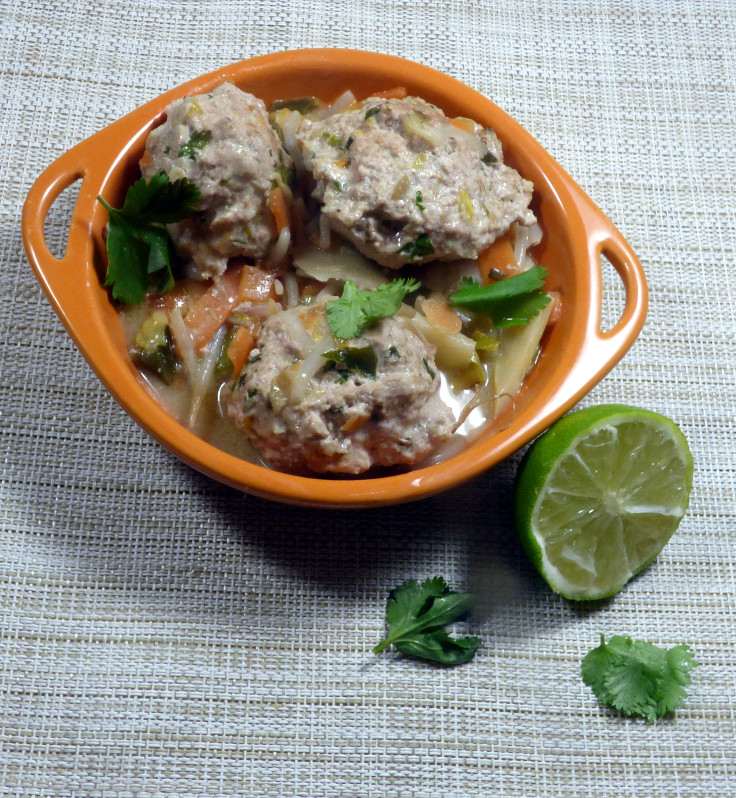 This could be a good recipe to try if you want to get your kids or partner to try something new. These meatballs have a subtle Thai inspired flavour that isn’t overpowering, and I used absolutely no  spice. None! I know! I’ve served them with rice and a stir fry here, but you could try them with pasta, or even a big pile of mash.

This pork meatball stirfry is based around my lemon and sage meatballs, but to accentuate the Thai flavours I cooked them in coconut milk. Rather than forming a sauce, by the end of cooking the coconut milk had formed a beautifully sticky, fragrant coating on the vegetables and meatballs.

I’ve added an alternative cooking method though- baked meatballs work just as well. This version of the pork meatball stirfry could be made in half an hour – it’s more like 45 minutes total time for the poached method. However, you can largely leave them to it once they’re simmering.  If you’re in a hurry and want to poach them try adding more liquid, or making twice as many smaller meatballs.

If you’d rather not use pre prepared vegetables you could use green beans, scallions, peppers and mushrooms  – even baby corn would do the trick. Frozen vegetables would work ok too- just combine the veg with the coconut milk and skip the frying stage.

I use lean pork mince, but you can of course use whatever sort you like. If you have leftover meatballs try them with a packed lunch – the ones I had cold were just as yummy that way. Using the blender or food processor means they stick together really well with minimal effort too. Perfectly portable – or perfect for those too small to have mastered cutlery. To make a lower calorie version swap the coconut milk for the light version. 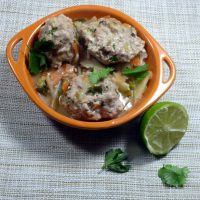 calories given include accompaniments detailed here

8 thoughts on “Pork Meatball Stirfry with Lime and Coriander (Cilantro)”