Sausage Crumble with Apple and Cheese

This recipe was originally unexpected.  It wasn’t something I planned to plan- I thought sausage, my husband said crumble, and the rest is history! One of those surprises where you know from the first forkful that you will eat it many more times.

I first came across  a savoury crumble in the veggie section of my student cookbook. This recipe, however, would be great for anyone who loves a good pie and fancies something different, or doesn’t have the time or space to play with pastry.

It’s since become a family favourite, as now  we have a small child it’s rare that we have the time or space to get messy with pastry. Our previous house was a small terrace with a tiny kitchen, so a sausage crumble was the ideal treat.

Sausage crumble is the ideal winter comfort food. However, they would be equally good in the summer with a light salad.

We usually eat this twice and cook half in individual dishes as a ‘home made ready meal’. If you’re a larger family it should multiply up well. You could use flour instead of oats for the topping, but it covers less well and doesn’t have the same crunch. I use extra mature cheddar cheese, but you can use your favourite hard cheese. The spices are enough to give a bit of a kick without being truly spicy, but you can turn up the heat if you wish.

If you have a go at this let me know how you get on-  a friend has already made her own increased-cheese version. I’ve stuck with a traditional British flavour here but there are so many potential twists…

Adapted from the original recipe, originally published on 24 May 2011 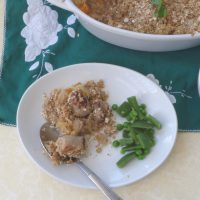 A savoury dish with tonnes of sausagey flavour but less hassle than pie.

5 thoughts on “Sausage Crumble with Apple and Cheese”