When I cooked Lime, Ginger and Coriander Chicken, it looked like a scrummy dish.  However, I felt it could do with some nice juicy oriental veggies to complement it, so I whipped up a quick stir fry. 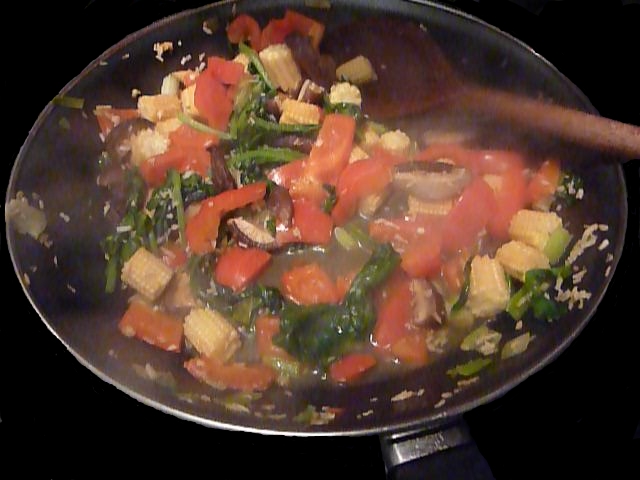 This would go perfectly with other strongly flavoured oriental dishes because it’s so simple.  I chopped up some spring onions, and a packet of baby corn, and diced a red pepper.

I had some spinach in the fridge, so a handful was rinsed and chopped.   For additional oriental-ness I sliced some shitake mushrooms. As not many of these are needed at  a time, I decided to try a jar of dried ones.  I soaked as many as I needed in hot water, following the instructions on the jar, then sliced them.

Then I heated some oil in a frying pan and chucked the vegetables in with a couple of desert spoons of shredded dessicated coconut.  I stirred them round until they were just cooked, but still crisp as a fresh spring morning.

I refrained from adding any extra condiments or seasonings as the chicken had plenty, and this was definitely the right decision.  I’ll be making it again!