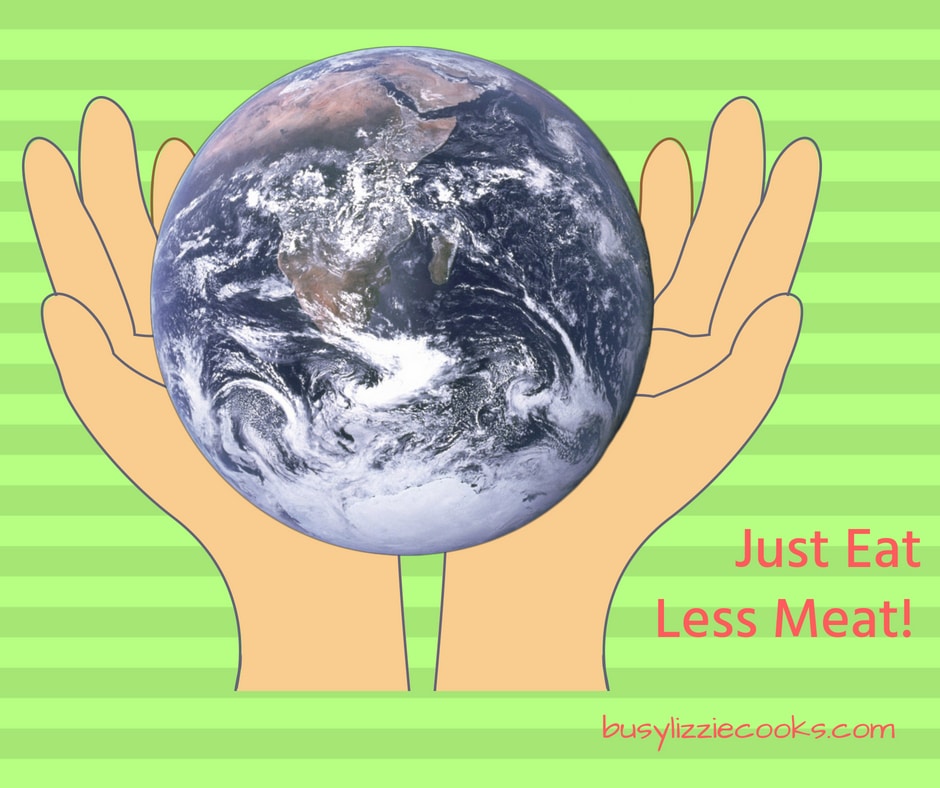 A friend recently shared this article, and it made me a bit less hopeless about the future of the human race. Flexitarianism – eating less meat – shouldn’t be just a lifestyle choice for a few. It’s the direction we are all headed, and we need to face up to it. One of the first things I did after reading it was remove a few of the meat dishes from our meal planner and add in a vegetarian one.

Do you do meat free Mondays?  Do you think that lets you off? I think it’s a great idea, a gradual way to introduce the idea of vegetarian food. But the truth is, cow farts are a serious factor in global warming. The truth is, skipping the odd bacon butty and having a veggie curry once a week is a starting point but we have a lot further to go than that. If we want to reduce our carbon emissions to the point where we avoid catastrophe, consuming animal products is something we need to think very hard about- and ideally do less of. And with meat free Mondays you could convince yourself that as you’re doing one day a week, you’re doing your bit, and that’s enough.

I’m not saying I am doing enough by any means. I drink milk like it’s going out of fashion, despite being aware of all the cruelty it involves. We love our cheese, and sometimes getting in three meat free meals a week can be a struggle. I’ve yet to come up with anything that matches the convenience of ham and salami for work sandwiches. But we stick with what we manage even when it’s tough, and we aspire to do more. We’ve recently discovered quorn – and the small non-pulse-eating one can’t tell the difference between quorn and chicken, so that’s a winner.

A flexitarian is someone who only occasionally eats meat or fish. It’s likely what many of my ancestors were as that was what they could afford – and similarly, when I was a student, I only occasionally bought and cooked meat.  I was a flexitarian before the word was even in common usage, along with many others around the globe with limited means. That’s when I discovered my love of pulses, and devised this meal. It’s so cheap and nutritious, it’s been a standby ever since.

I’m a big evangelist about pulses. They’re so cheap, they are easy to cook (even the dried ones if you have a pressure cooker or slow cooker) and they’re really versatile. Lentils can be used in most of the ways that you’d use minced meat, with a little extra water – like in this lentil bolognese.

You’re probably going to tell me, though, that you’re one of those people who just can’t cope with a meal that doesn’t taste meaty. Well, I have a bit of a revelation to share. Bisto favourite gravy granules are vegetarian. The green V logo is small and round the back so meat eaters don’t notice, and their own website doesn’t even let on. It really won’t hurt you to try a meat free meal once in a while, and there are many out there designed to taste like meat. Like I said, when I told my son that the quorn I was serving is pretend chicken, he corrected me. No Mummy, it’s real chicken.

The other way of keeping that meaty flavour is doing as many of our ancestors did and cutting portion size. I like mixing up pulses and meat to make the meat go further. In my lamb and lentil Keema  you’d be hard pushed to spot the lentils. This technique works really well in the slow cooker – add your normal quantity of meat, and a portion of pulses, and it will do two meals. There are so many amazing meat and bean or lentil combinations that soon you will forget you started doing this to be virtuous. Take my lamb and lentil curry:

Or the rather fantastic sausage and pinto bean chilli that fast became a favourite in this house. In the slow cooker the meaty flavour infuses the whole dish, beans included, and you really wouldn’t guess you’re getting a half portion. You can also do as many of our grandparents did and get another couple of meals off that chicken carcass, rather than chucking it and getting something fresh for Monday. Pick it clean of meat to use in a curry or pasta, then throw the rest in the stock pot or slow cooker with water. You’ll get a lovely stock for soup or risotto, and even more meat will come off the bones too.

And if you don’t like pulses at all, there are plenty of other options. I’ve always thought that eggs should be a meal in themselves, and have found a number of ways to accomplish this. You can find some of them here. Peanut butter is also really underrated – we often slather stir fry vegetables in a simple satay sauce, and peanut butter can be used to create more exotic flavours like this African inspired soup. Start off with the sort of meals that aren’t ‘meat shaped’ anyway – pasta, stir fry, soup, hearty salads and even Indian food don’t have a meat shaped hole.

If you really must, there is pretend meat a-plenty. Whilst Quorn and Linda McCartney sausages don’t taste exactly like meat, they can still be a part of a really tasty meal, and no-one is insisting you need to give up your chicken breast and cumberland bangers. I usually prefer to eat vegetarian food that I value for its own unique flavour, but meat substitutes do have their place.

Go on, do your bit for our planet. I hope that my son’s grandchildren and their children exist (or children of that generation, no pressure lad), and are able to have a decent life, and we can help by making the term ‘flexitarian’ redundant because we all eat meat only infrequently, and can afford to prioritise quality, air miles and animal welfare when we do.

Do let me know what you think in the comments – are you trying to eat less meat? Do you do meatless mondays?